A Little Bit of Healing Magic

I was training a new member who is originally from Korea. At some point while we were talking, I decided to show her my mom's 80th birthday hamsa. 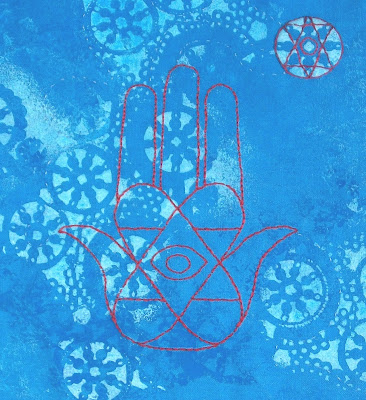 She was really intrigued by it and told me that it reminded her of Korean shamanic symbols. I wanted to know more. I was surprised to find out that Shamans in Korea are women. That this title and role in the community often passes from mother to daughter. But on occasion, there will be a woman who is not of shamanic lineage...she is called to this duty by a natural ability to communicate with the spirits of the ancestors...

Later in the day, a young woman came into the gallery. Although somewhat hesistant, she wanted to ask a question. Did I know of someone who might be willing to make a memorial quilt for her. Her husband, a member of the military, had recently died in action. She had his uniform and some of his clothes and could not bear the thought of giving or throwing them away.

I immediately thought of the wonderful quilting couple, Sue and Gene, who had just taken my weekend workshop. The words that best describe these two are warm and generous. They work together to create commemorative quilts and what I can best describe as healing quilts. I was most moved by the quilts they make for very young terminally ill children. These are always butterfly quilts which comfort the children and later comfort the parents.

All I can say is that perhaps a bit of shamanic magic was involved...or at least a little bit of healing magic. 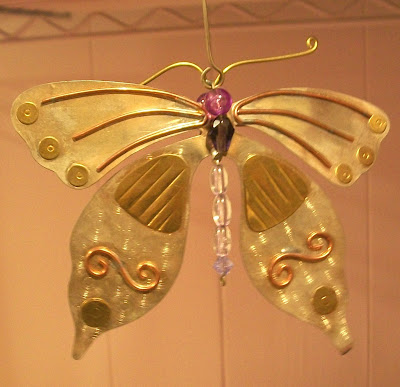 Playing with Visible Mending on a t-shirt...woven donuts!

View my complete profile
To view a selection of my art, and for information about my upcoming classes and shows, go to
www.threadborn.com

To learn more about ordering my book, click on the cover!
Julie's new book, Fabric Printing at Home (Quarry Books), is now available. Imagine a whole book dedicated to playing with materials from your kitchen to design and create beautiful, unique fabrics!

Already own a copy of Fabric Printing at Home? Why not write a review (I'd really appreciate it!)?