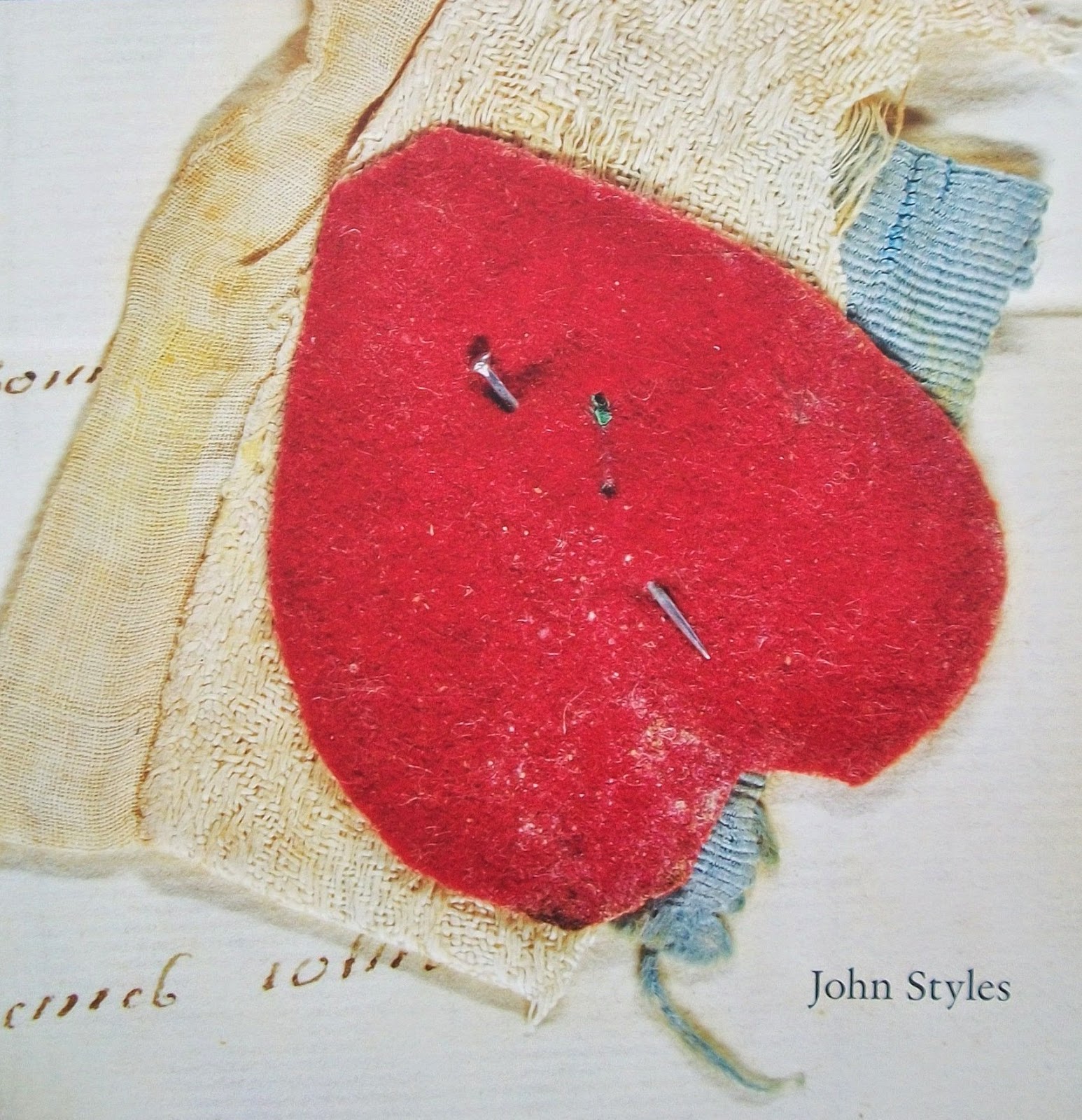 My Patching, Stitching, Weaving: Creating Healing Cloth workshop is coming up in a couple of weeks.

In prepping for this workshop, I got inspired by two books. One is by a local quilt artist and the other is a catalog for a show that I wish I could have viewed first-hand. Both are testaments to the healing power and personal meaning that can be found in cloth. 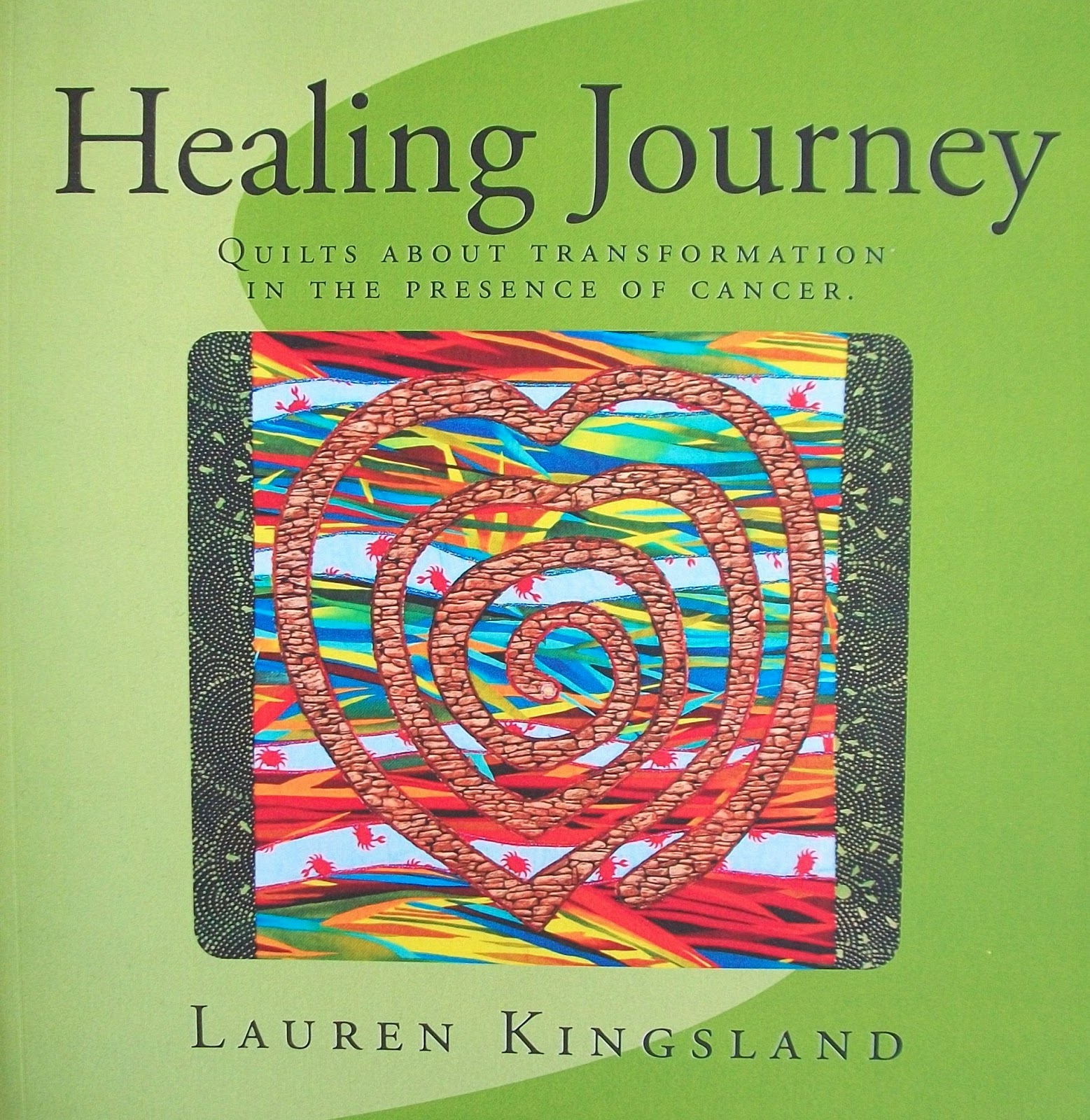 Healing Journey: Quilts About Transformation in the Presence of Cancer by Lauren Kingsland

The quilts presented in this self-published book were first exhibited as a group at the Lombardi Comprehensive Cancer Center at Medstar Georgetown University Hospital, Washington D.C. The works were inspired by Kingsland's experiences of cancer that she witnessed during her work as a professional visiting artist at the hospital. Each week she offered hands-on quiltmaking and fiber art projects to patients, families/caregivers and hospital staff as "a creative outlet for stress management and community connection". Hundreds of people shared their stories with her "over pieces of bright colored cloth and a needle". (p. 1)


"A quilt can be a metaphor for putting together the pieces of a situation in an harmonious way. As an artistic medium, a quilt can be a tool for gaining a new perspective on the familiar. Each fabric alone can suggest an idea or evoke a feeling. Put them together in a quilt and often the result is a whole greater than the sum of its parts...." (pg 1) 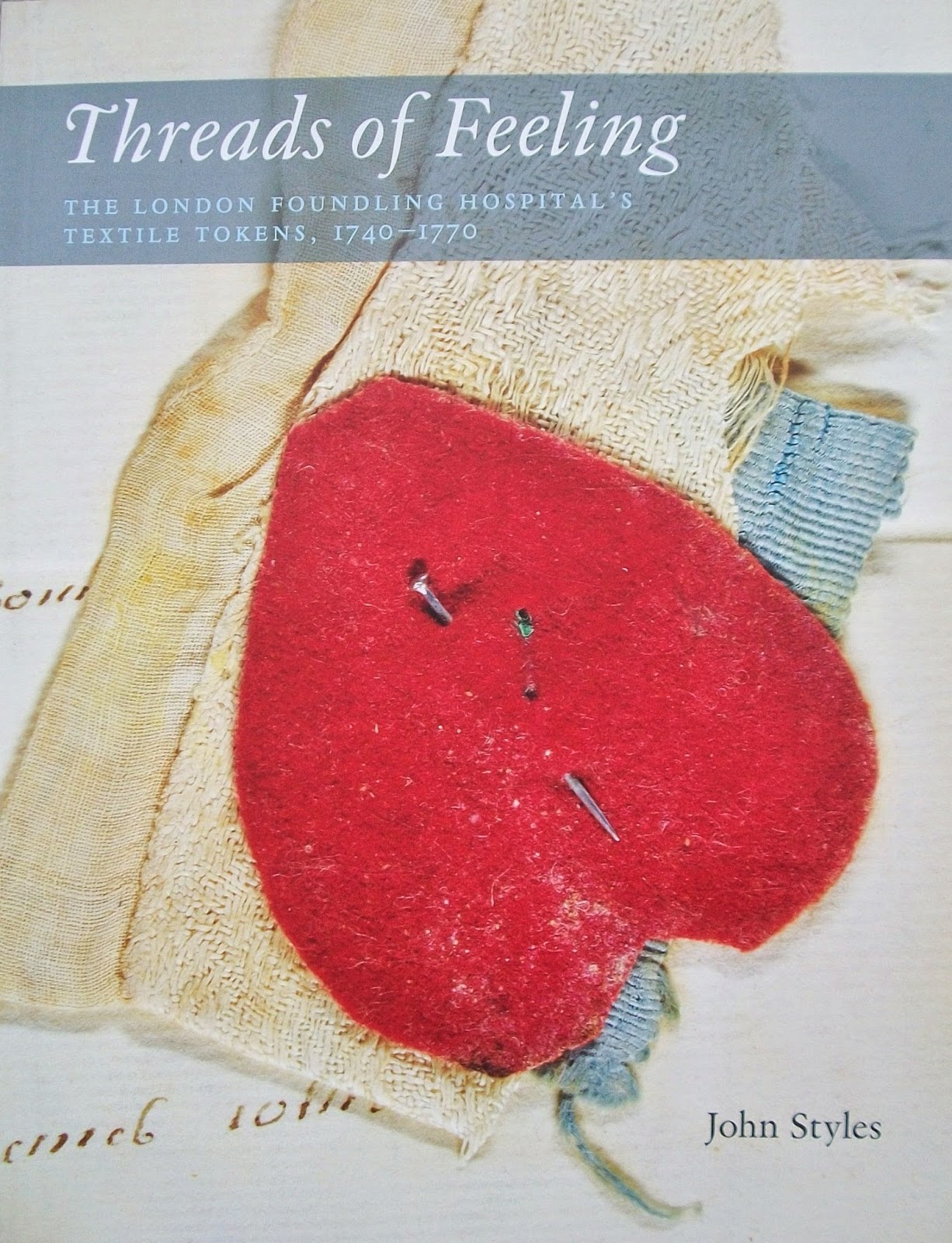 Styles first started researching the textiles from the Foundling Hospital as a means of learning more about the clothing of ordinary people during the eighteenth century. Surviving garments of working class people were hard to come by and he decided to search instead for surviving textiles. Historians of children's clothing pointed him to the Foundling Textiles with its archive of  "some 5,000 rare, beautiful, mundane and moving scraps of fabric...Britain's largest collection of everyday textiles. They had so much to tell us, not just about the history of fabric and clothing, but also about the lives of women and their babies.." (p. 6) 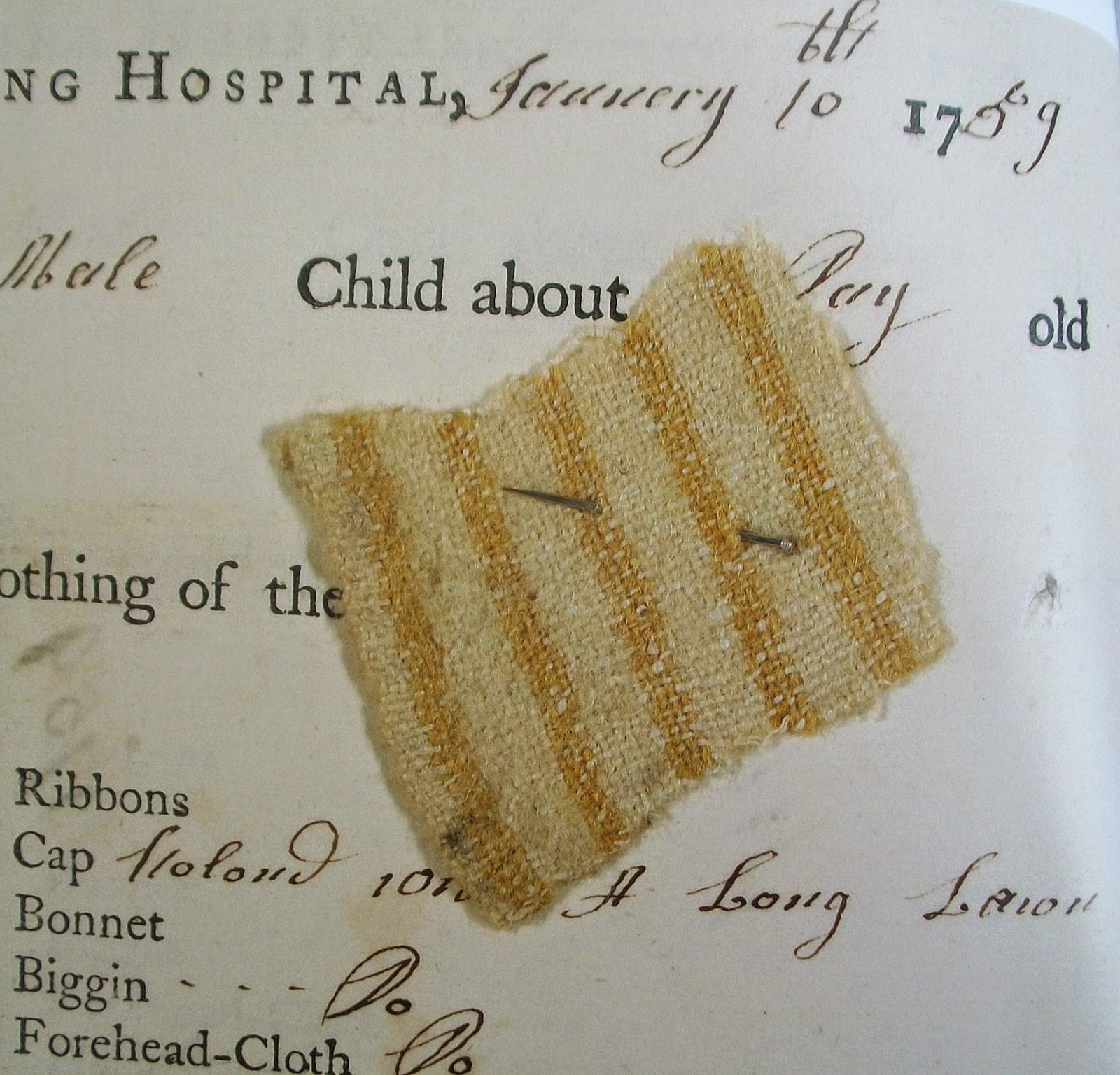 The hospital was established in 1741 "for the maintenance and education of exposed and deserted young children." (p. 11) (T)he mother retained the right to reclaim the child if her circumstances changed. In practice, such cases were few. Only 152 children were reclaimed out of the 16,282 admitted between 1741 and 1760...two-thirds admitted during these years died. 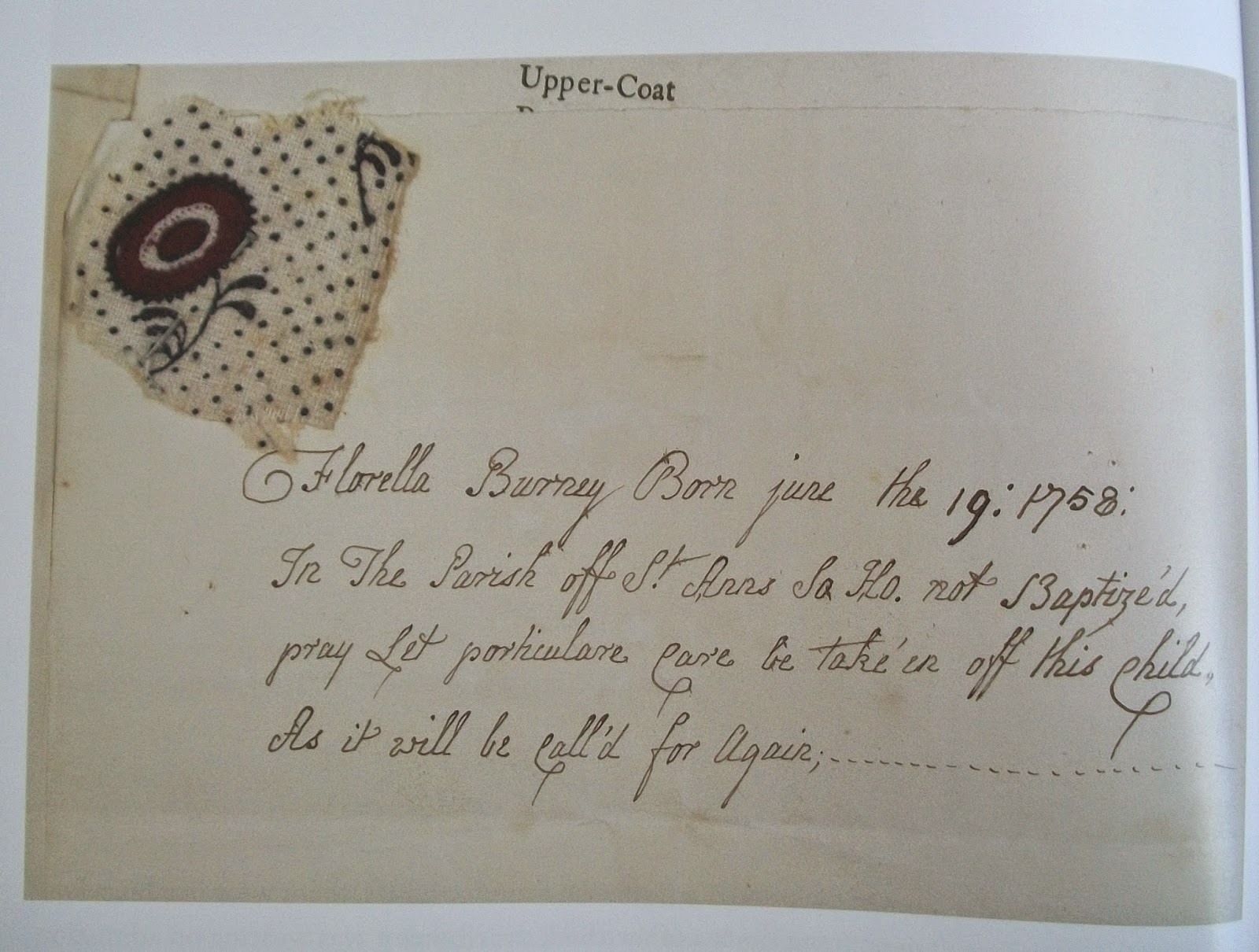 "The number of children actually reclaimed by their mothers may have been tiny, but ensuring that mothers were able to take their children back was an important priority for the Hospital." (p. 14).

"...the Hospital encouraged mothers to supply a token, which might be a note, a letter, or a small object, to be kept with the billet as an identifier... (p. 15) Great care was taken to take and retain information collected on registration forms (billets) and to preserve the tokens. "An overwhelming majority of the objects attached to the billets are swatches of textiles." (p. 17)

"The Foundling textiles also include many examples of what is clearly non-professional embroidery, often executed in woollen or worsted yarn. What this crude embroidery lacks in skill is sometimes offset by its raw emotional power." (p. 57) 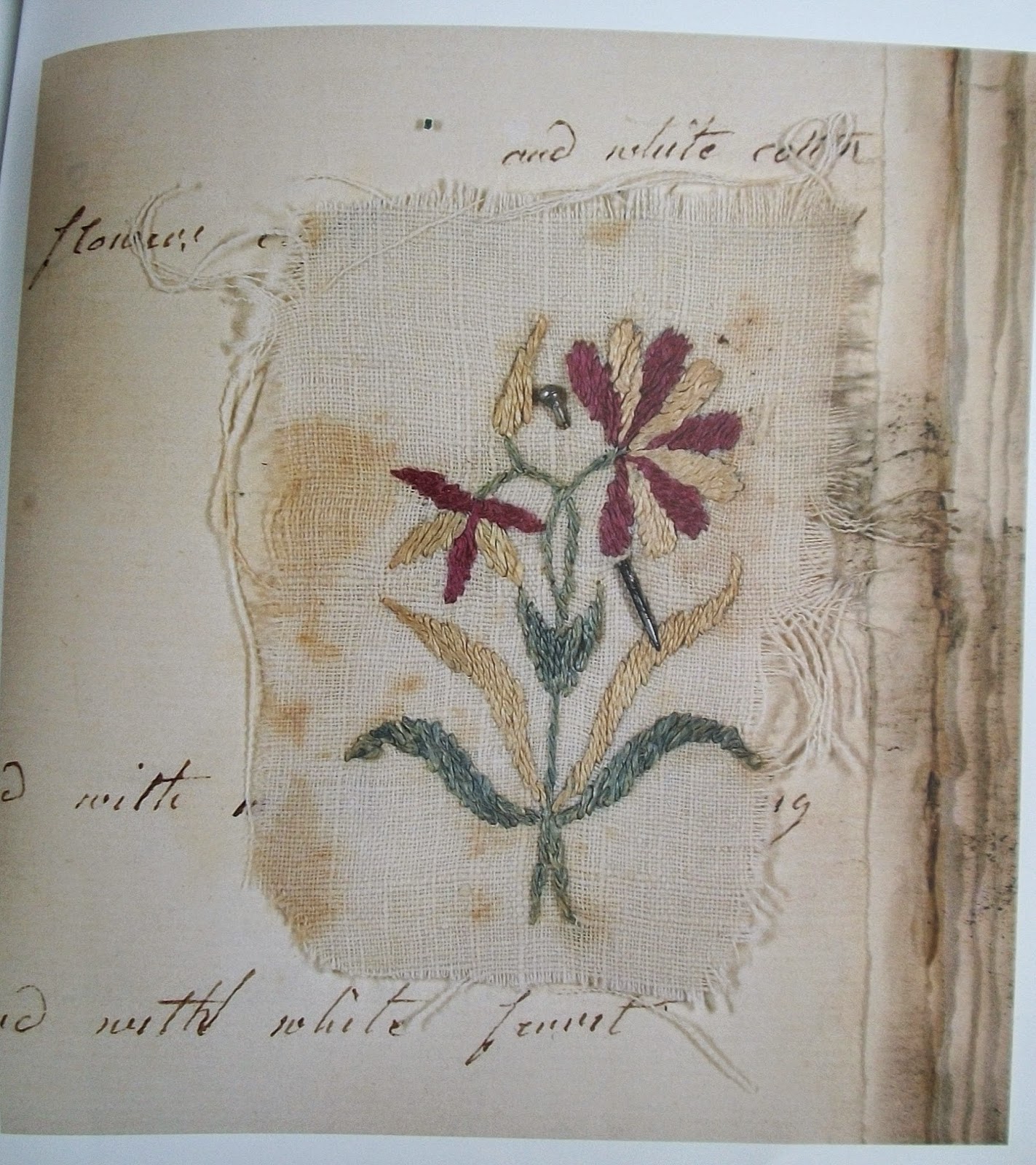 "The hopes of the mothers invested in their babies were also expressed in fabric....such hopes were expressed far more vividly by means of carefully selected textile images, often obtained by customizing the natural imagery commonly employed in designs printed on linens and cottons. An acorn or bud might suggest germination and new growth, a bird or butterfly the chance to fly free, a flower the capacity to blossom and fruit." 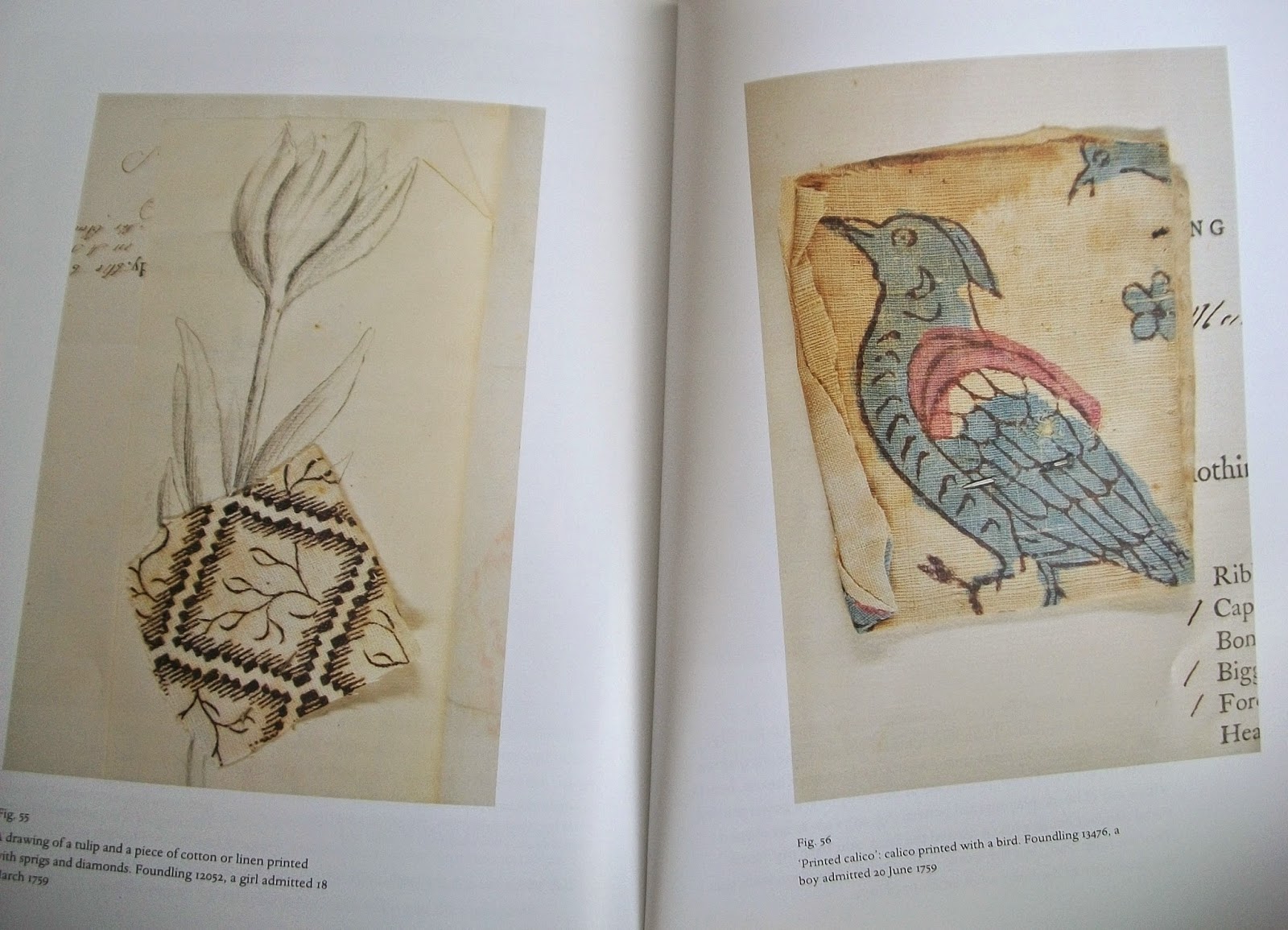 ...but the most direct expressions of raw maternal emotion found among the Foundling tokens are those that used the heart, the established symbol of love in the eighteenth century...It is fitting that the only token illustrated in this book for a child reclaimed by its mother is a piece of patchwork with a heart sewn on it in red thread. It was subsequently cut in half. One half was presented with the child to the Hospital. The other was, presumably, kept by the mother until the reunion, when the heart was made whole." (pp. 64-70) 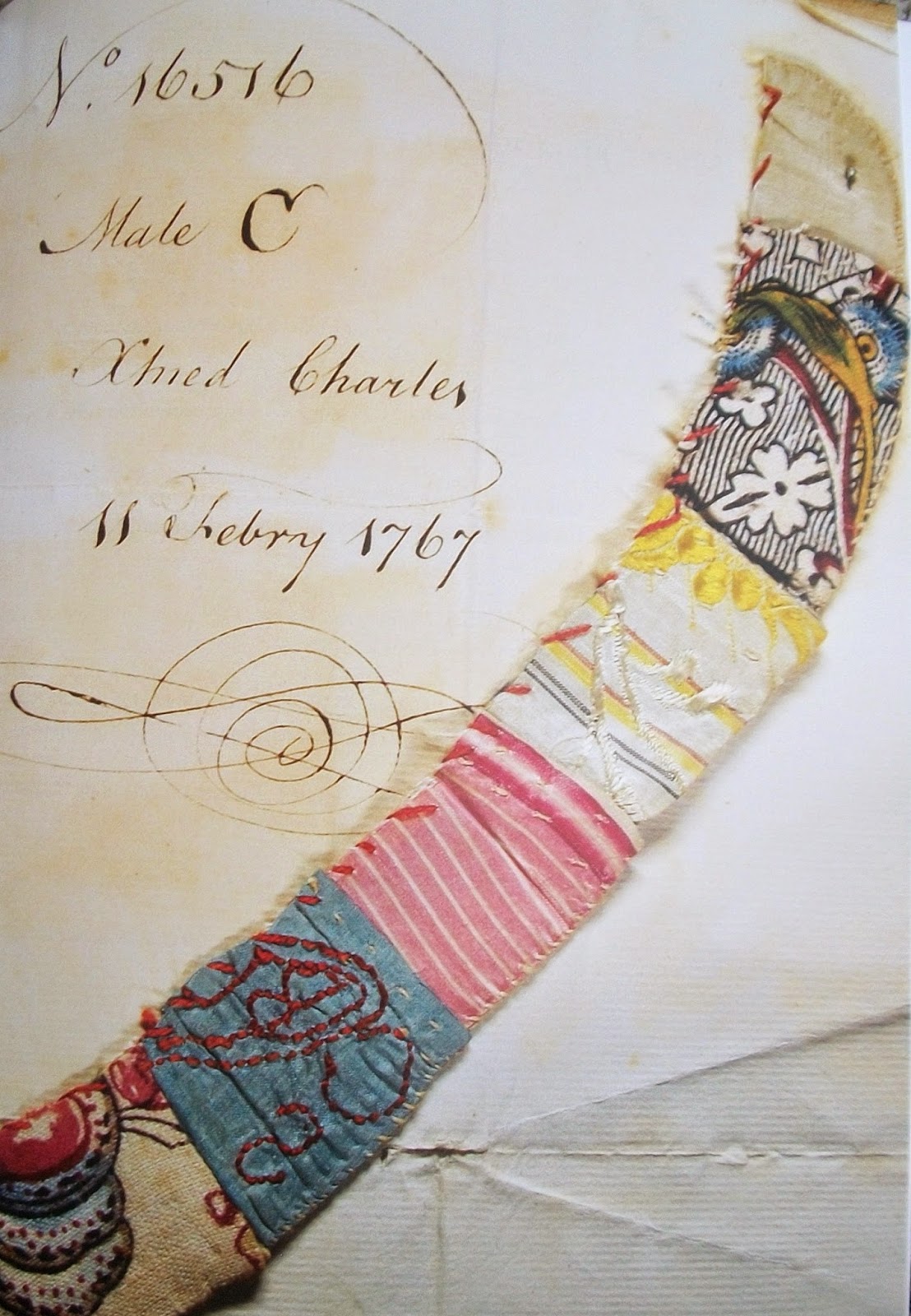 Having fun with Stitch Play! Here's a sample using variations of Chain Stitch and inspired by adjectives!

Julie B. Booth is the author of Fabric Printing at Home published in 2014 by Quarry Books. It is still available through second hand book sellers. Don't be fooled by pirated editions on Amazon! My book is dedicated to playing with materials from your kitchen to design and create beautiful, unique fabrics! Below are some book reviews.